Have you had the toilet conversation yet? If you’re traveling or living in India it’s bound to happen. Here you’re totally allowed to talk about what goes on in the loo. Everyone feels the need at some point.

How does that water spray thingy on the side work? Is it really better to squat than to sit down? No toilet paper, really?

The Indian loo raises a lot of questions for foreigners, but since a few years toilets have become a topic for Indians too. Or rather, not having a toilet has finally become a topic. Over 600 million Indians are forced to defecate out in the open, because they don’t have a toilet in their house. Public toilets are few and the ones that are there are often poorly maintained. Slum dwellers prefer to find a spot in the bushes or along side the railway tracks.

Recently I was invited to spend a day with Dr. Pathak of the Sulabh Foundation. His foundation has been the leading force, for many years, behind bringing toilets to every Indian household. The Indian government has recently adopted this goal. Prime minster Narendra Modi has dedicated himself, going by his campaign speeches, to have a toilet in every home by 2019.

Dr. Pathak and I spend a day in Himathala, a village that didn’t have a single toilet until about five years ago. But now, thanks to Sulabh International, every household has at least one toilet. Dr. Pathank thought I should talk to the villagers to see how much difference the toilets have made to their lives.

The village is about an hour and a half away from Delhi. This gave Dr. Pathak time to share some of his life’s stories with me while we were on the road. When talking to Dr. Pathak it became very clear to me how he is not just a ‘toilet man’ Dr. Pathak is a human rights advocate above all.

A house in Himathala that now has a toilet attached as you can see on the right side.

Growing up in a Brahmin family household the harsh reality of the Indian cast system did not go unnoticed to Dr. Pathak. He tells me about the time he touched the maid – just out of curiosity because it was something a Brahmin should not do according to his mother. As a punishment she fed him cow’s dung to clean the sinful act from his body. ‘The experience was traumatic,’ Dr. Pathak tells me, one he never forgot. It only made him more determined to give dignity to the people that clean our houses, streets and toilets.

In India a separate group of people within the caste system have – for decades – been responsible for cleaning human waste. These untouchables would not be allowed to drink from the same village well. Or be in touch with other people from higher castes in any way, the work that they did was unclean after all. Modern-day Indian law forbids this practice, but the stigma on this group of people prevails.

Dr. Pathak welcomed by the village leader and some women.

When Dr. Pathak made the choice to dedicate his life to clean toilets for everyone and thus eradicating the practice of human waste collecting he sacrificed his pending marriage. He could not have both, which decent Brahmin bride would think of marrying a man that spend his days talking about toilets?

Dr. Pathak chose his career, but talking to local government leaders about the need for toilets wasn’t much easier than talking to his family about them. ‘Toilet Talk’ was something that was reserved for after the chai was finished he was often told. Such unsavoury words should not be spoken before.

In the village of Himathala I found that people loved to talk about their toilets and the change they have brought to their lives.

‘I don’t have to get up six times at night to go with the girls out to the fields to relieve themselves’ Says Shakuntala who lives with six women in her household. For security reasons the women would never go alone at night. It meant Shakuntala hardly got any sleep on some nights.

The head of the village tells me there where days during monsoon when you couldn’t walk through the village. Rain would spread al the excreta and turn the lanes of Himathala into slippery paths. I can only imagine the health hazards that must have caused. According to Dr. Pathak the number of diseases in the little village have gone down drastically.

Shakuntala and some of her family members pose with Dr. Pathak.

The two pit toilet Dr. Pathak invented himself allows human excreta to turn into compost. The composts can be removed safely after a few years and used to firtelize the lands. How long a tank of human waste is turned into harmless compost really depends on the size of the tank and how soon it is filled up. There are two pits so when one is full the toilet waste is directed to the other. It’s a completely closed off system that leaves no room for harmful bacteria to escape.

I felt lucky that I got a chance to see how Dr. Pathak was welcomed as a hero in the village. The women of the village showered him with gifts and hung flower garlands around his neck. There was singing and lots of dancing. The importance of something that we take for granted in the west, having a clean toilet inside your house, really hit me that day.

Next time I talk to someone about toilets in India, I’m surely going to tell them about my day in Himathala and the great work Dr. Pathak and his team do. 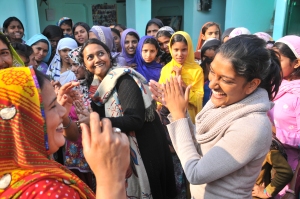 Like any big event in India. There should be some dancing involved. So we danced.