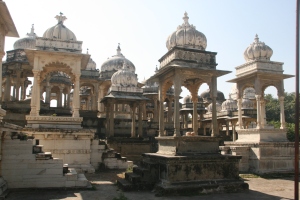 A Cenotaph is structure that is build to remember someone after they die. It doesn’t actually hold a person’s remains. It’s meant as a beautiful memorial. I didn’t know this before I visited the Cenotaph site in Ahar located less than three kilometres away from Udaipur’s city centre. Hardly 15 minutes if you take a rickshaw from the City Palace, you’ll find this amazing place filled with white marble structures of different sizes and designs.

When a member of the Maharaja’s family dies they are cremated here. Since five-generation Mr. Ravi Rathore’s family has had the honour to prepare the cremation of the royals of the Mewar Kingdom. Today Ravi is the site’s caretaker and incidental guide if you catch him at the right time. After wondering around with my camera for about an hour I was lucky enough to run into Ravi. His stories made these old structures and the people they commemorate come to life for me.

When the Maharaja -Udaipur still has a royal family- or one of his family members dies Ravi is one of the first to know. He has to hurry to make the necessary preparations for the funeral pyre. He goes to the market to buy sandalwood, clarified butter and coconuts. The quantity in which he buys them depends on the wealth of the person. Wood, especially sandalwood doesn’t come cheap in India.

The sandalwood burns intense and leaves behind a comfortable sent to mask the smell of the burning body. The clarified butter, or ghee as they call it in India, makes it easier for the wood to catch fire. Lastly, the coconuts are added to the pyre to give the deceased a good send off. Coconuts have a sacred meaning in Hinduism.

It takes up to three days, according to Ravi, for the flames to turn the full body to ashes. The family leaves after some hours when all the rites are completed, but Ravi is stays to make sure the fire keeps burning. 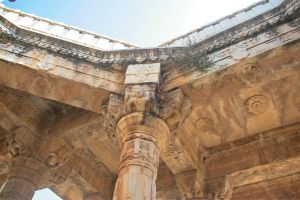 Detailed ceiling of a cenotaph

In the days after the family comes back to claim their loved one’s ashes and to clean up the burning site. This is important says Ravi, out of respect to the next family that comes here. It’s part of the cycle of life.

When the ashes are brought home the family members invite friends and acquaintances for a big meal. But before the guests are served a small part is kept aside. A dog, a cow and a crow should be given a taste of the meal first. Then a small part is offered to a picture of the deceased. Only then it’s time for the guests to eat. When the food is finished a small part of the family stays behind to talk to the direct family. They have business to discuss.

Each of the family members gives an amount of money to the eldest son. He is given the donations as start-up money, the first step to creating his own wealth. In turn he asks his family members to take up positions in his new venture.

One of the bigger cenotaphs

The size of the cenotaph directly relates to the son’s success.

‘If he’s a loser in life he won’t have much money to build one, but if he does well he’s able to construct an impressive memorial for his father’, Ravi explains.

It can take many years before the cenotaph is erected. Only when there is enough money the son will start talking to designers and builders. It isn’t uncommon for a cenotaph to take dozens of years to get finished.

In Ahar 250 structures stand side by side on a piece of land hardly bigger than a football pitch. Nineteen of them are made for previous Maharajas. On the left side of the entry their name is inscribed in the marble together with the period they ruled.

Ravi, explains that the shape and the statue in the centre of the cenotaph tell you something about the people that are remembered. The dome like roof structure for example tells you the deceased was a respected person. Like the colourful turban Rajastani men wrap around their heads. In the back of the field there’s a small line of cenotaphs without this typical roof. These are the cenotaphs of children that passed away before they could achieve a respected social status.

When a cenotaph has a small statue of a man and woman together at its centre the structure remembers a Sati case. In ancient Rajasthan it was common for the wife to throw herself onto her husband’s funeral pyre. Her life was effectively over after the main breadwinner of the family passed away. The practice of widow suicide is called Sati. In a village near Jodhpur, Ravi tells me a widow is said to have even committed Sati as late back as in 1980.

When the wife dies before the husband her husband’s cenotaph is later on placed next to hers. While Ravi explains all of this I notice a statue depicting a whole group of people. In this case the husband had multiple wives whom all died at his pyre, he tells me.

Ravi, a father of two young daughters shakes his head when he speaks a bout the Sati ritual.

‘ Those family members could have given their donations to the widow instead’ he says.

His daughters as far as he can tell – they’re only 5 and 7 years old – have no desire to take over the family business. They’ve told their father that they want to become doctors instead.

If you want to go see this site

Take a rickshaw from Udaipur’s city center for a bout 400 rupees. You can bargain it down, but if you want him to wait for you while you stroll around for a couple of hours, then it’s a fair price.

This isn’t an official toerist site, so you won’t need to pay an entry fee. You do have to sneak a few rupees to the security guard at the gate though. For 50 rupees he’ll let you take photographs too.

Please be respectful of this place. No loud talking and take of your shoes before you enter the cenotaphs. People still come her to pray, keep that in mind when you walk around with your camera.

There are two sections. Do have a look behind the wall, you’ll find the oldest structures on that side. In the far right side you’ll find a little stairs that will lead you through a door in the wall.

Have you been to Udaipur and seen the cenotaphs of Ahar? Send me a message to tell me about your experiences. If you just liked this post and want to let me know that, drop a line below.