In a previous post I’ve talked about the amazing Nur Jahan being the real queen of Agra. Visiting her father’s tomb is something you should definitely do when you’re in the city. But Agra recently got another reason you should hang around a little longer. While you’re busy sightseeing, make some time to have lunch at Sheroes Café.

When I was there around the beginning of December Sheroes Café was just about to officially open it’s doors. As a ‘soft launch’ the café had been open for about a month already to see if the concept would have potential for success. The food isn’t the main reason why you want to make a stop here.

The Sheroes café is set up by an organisation called Stop Acid Attacks Now and is run by female survivors of acid attacks. In India about four women are attacked every week with a product that burns through the skin within seconds. Leaving them scared for life, if they survive the attack at all. SAAN expects that the real number of acid attacks in India is even higher, because many women don’t report it out of fear for their attacker.

It mostly involves women, but there are cases know also of men being attacked with the acid as well.

The attackers are often men who have pursued the victim as a potential love interest. When she tells him that she’s not interested, they turn violent. Their male – a important part of this society it seems –  pride is damaged after all. If she doesn’t want to be with me, then she’ll have no one ever again, they seem to think. Acid in India is commonly available as a toilet cleaner, this makes it easily available to anyone suffering from a fit of rage.

For acid attack survivors it is very difficult take part in public life after they’ve been attacked. It’s very often their faces that are most damaged. Many spend the rest of their lives behind closed doors or prefer to hide their scared faces behind a veil when they do step out of the house.

What makes the Sheroes café so special is that it allows these women to take back control over their lives. They now have a meaningful career outside of their home. It’s a job that makes them feel proud to be out in the open. And if you spend some time with the five women that work there currently, you’ll understand how incredibly inspiring they are. 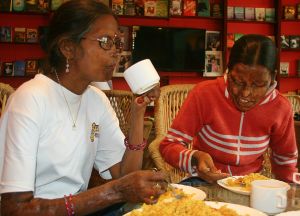 Geeta Mahau and her daughter Neetu having their lunch break.

At the café one of the first women I meet is Geeta Mahau. Even though she has never had a job like this before  – she mostly stuck to menial jobs out of the public eye – she walks confidently around the café. Cleaning tables, moving chairs around and directing people to get the café ready for the grand opening in a few days.

‘People at my home used to tell me that seeing my face would make them lose their appetite, Geeta tells me, ‘But now I hold my head up high and do my job’

In the middle of the night while she was sleeping her own husband attacked Geeta with acid. Her husband was a drunk and he recently gotten himself in to some debt. He often took out his problems on Geeta.

‘ I didn’t like the way he treated me that’s why I took my daughters and left to my parents place just a couple of days before.  But after a few days I decided to try it one more time and come back home to him’

Geeta didn’t know that while she was away her husband had already planned the attack and purchased the acid. Out of anger that his wife wasn’t able to give him a son, but only daughters, he decided that he would be better off without them. The acid was meant to kill them. Geeta’s newborn baby died from her injuries, but her other daughter Neetu, barely 3 years old, survived. She now works in the Sheroes Café as well. Because of the attack most of her eyesight is gone. Being able to work at the café is something she has never expected to do, but her dreams are bigger than that.

‘ I dream of being able to go to school and learn English or just read books’ she told me.

Geeta’s husband spent two months in jail. It was Geeta who decided to drop the charges against him, after he begged her to take him back. He told her he would be a better husband and the acid attack was a mistake. For a while he did manage to stay away from the alcohol, Geeta assures me, but not for long.

The harsh reality for many women in India is that life without a husband is more difficult for them than spending it with a drunk and abusive spouse. The stigma that a woman has to carry who lives alone was too much for Geeta. First she tells me that she is worried about him ‘Where will he go if we don’t take care of him’ she says. But as we continue the conversation she gets to the core of the matter.

‘If I leave him now I’m afraid he’ll attack us again, he’s done it before, who says he won’t do it again?’ 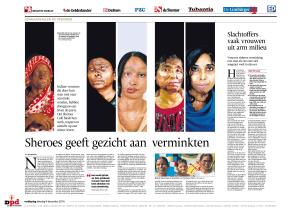 Article I wrote for Dutch newspapers about Sheroes Cafe opening in Agra.

For many of us it might be inconceivable to continue living with a man that has wanted you dead at some point. To live in the same house as the person that is responsible for your scars that ruined your life. One of the SAAN staff members Hardika tells me she hopes Geeta and Neetu will become more independent through their work at the Sheroes Café and find the strength to leave their husband and father.

Of course I agree with her, but only partially. Finding the strength to leave is one thing, but having the strength every day to live with that man. Serve dinner to that man and take care of that man. It takes an incredible strong woman to do that, I think. To me Geeta is a modern-day queen of Agra, who thrives despise of her drunk and abusive husband. Something she has in common by the way with Nur Jahan.

If you want to support the Stop Acid Attacks Now team in their fight to give these women their space in public life back, visit the café. I assure you that as a customer you’ll be able to look passed the scars and see how these women radiate beauty. I like spending my time and money in places where it counts double and it really does at Sheroes Café.